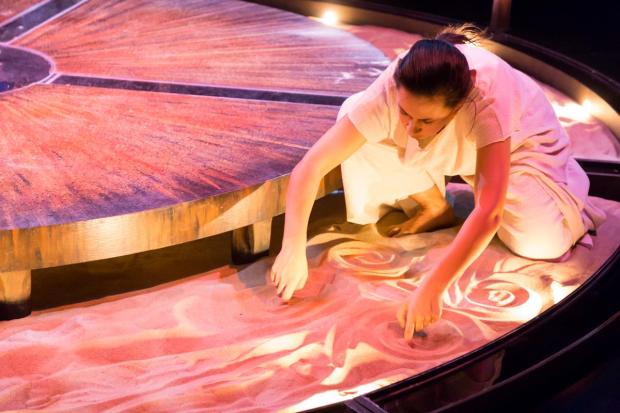 In Sappier’s play, the beginning and the destination are, in some ways, one and the same. There is something circular about the personal, often difficult journey that the young woman embarks on. She moves away from her family only to return again. Of course, the young woman doesn’t return the same. Life experiences and guidance from her ancestors push the young woman to see beyond herself and see herself in others, namely her mother. She learns forgiveness and that makes both her return and a new beginning possible.

Evans performs on what has the appearance of a large medicine wheel. The set, designed by Andy Moro, has two tiers. In the first, each of the four quadrants are filled with sand, and they are divided by small canals of water. The second tier is a wooden platform raised in the middle, with a glass-covered opening in the center for light to shine through (lighting design by Moro).

What’s interesting about Evans’ choreography is the vulnerability and unease that comes through in the movement, but also the resilience that pushes the character forward. Of course, that resilience is challenged at certain points, but nonetheless it remains. Evans’ movement captures the anxiety of being displaced, of not feeling a sense of belonging. The sand plays an important part in this personal investigation as Evans pushes it, spreads it, and eventually comes to make peace with it. Rough waters calm with time, but, as Sappier warns, it’s easy to lose one’s footing and be swept away. Evans’ choreography is exciting and articulate.

Although the script could be more concise, Sappier’s writing is rich in vivid imagery, which shouldn’t surprise anyone given her creative background. The set truly feels like an extension of Evans and her character. And Moro’s lighting choices sync well with the stages of growth in Sappier’s play.

For more information about the show, including how to purchase tickets, visit: http://www.tnb.nb.ca/finding-wolastoq-voice/