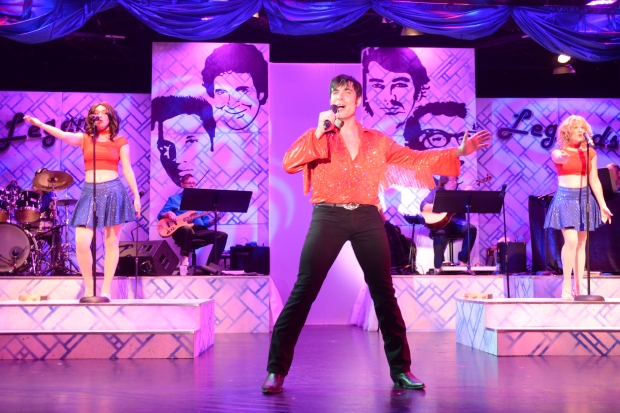 Playing now at Stage West until September 4th, Legends of Rock ‘n’ Roll is a fun reunion of the biggest names in rock ‘n’ roll history. Created by director/choreographer Liz Gilroy and musical director Konrad Pluta, the show brings rock legends Buddy Holly (Al Braatz), Neil Diamond (Gaelan Beatty), Tom Jones (Luke Marty), and Elvis Presley (Matthew Lawrence) together under one roof for a dazzling reminder of why these artists and their music have endured for decades.

Before each rock legend enters onstage, the show presents a brief highlight reel of their personal life and professional career. It is a nice touch and chance to learn something new about these household names.

The funny thing about rock legend Buddy Holly is that he was a little bit of a geek, although his thick-rimmed glasses remain popular today with young men. Braatz delivers Buddy’s sweet, sorta dorky southern charm very well in songs like “That’ll Be The Day” and “Peggy Sue.” And yes, there’s a whole lot of Buddy’s signature hopping from Braatz who came ready with his proverbial dancing shoes.

Neil Diamond takes the stage next with “America,” an anthem for immigrants landing in the land of opportunity. Beatty’s big voice really delivers the rousing feeling that the song’s lyrics aim for. The performer truly makes the stage his own with his cool persona and winning smile. The audience jumps at their opportunity to join Beatty in singing “Sweet Caroline.”

Sharing the stage with the rock legends are backup singers and dancers Chelsey Duplak and Tiera Watts. Beatty performs “You Don’t Bring Me Flowers Anymore” with Duplak in what is an absolutely stunning duet. The song, which Neil famously sung with Barbra Streisand, soars thanks to Duplak’s gorgeous, powerful voice that brings a lot of weight to this tale of estranged lovers.

Opening the second act is Luke Marty as Tom Jones. Marty plays Tom with real gusto and vibrance, ideal for numbers like “What’s New Pussycat” and “Love Me Tonight.” The performer’s big stage presence and dance moves really light up the stage, along with his very funny banter with the audience. Marty’s delightful performance of “It’s Not Unusual” has the audience ready to bust-a-move in their seats.

Elvis is the final legend of the night, and the only artist to have a costume change during his act. Dressed in a leather jacket, Lawrence brings out Elvis’ bad boy charm for songs like “Hound Dog / All Shook Up” and “Jailhouse Rock.” In between these two animated songs, he shows the King’s softer side with “Love Me Tender.”

Duplak and Watts perform “Amazing Grace” as a duet while Lawrence changes costume backstage, and no doubt catches his breath after an energetic first half. It is a beautiful duet that makes us want more from Duplak and Watts, both of whom are simply fantastic in their roles.

The second half starts strong as Lawrence not only comes out dressed in Elvis’ signature white jumpsuit, but also performs “Viva Las Vegas” with the kind of high roller enthusiasm such a fun number deserves.

Introduced back to the stage one at a time by Duplak and Watts, who start the final number off, all four legends come out for an ensemble performance of “Johnny B. Goode” and “Whole Lotta Shakin’ Going On” to finish the night. It is an electric conclusion to this journey through rock ‘n’ roll history.

There’s something special that happens when an old, familiar tune comes on the radio. Memories of people and places, sights and sounds burst with life again as the drive home from work suddenly becomes a trip down memory lane. Stage West’s latest production captures this nostalgia with its stellar musical direction and talented performers.

Costume Designer Rebecca Toon has an eye for costumes that truly pop and reflect the character of each rock artist. Set Designer Sean D. Ellis has created a set that frames the action very well, giving the performers a chance to truly stride across and take the stage as needed.

Gilroy’s lively direction injects a lot of energy and humour into this showcase of rock ‘n’ roll legends, making for an enjoyable night out at the theatre.

For more information about the show, including how to purchase tickets, visit: http://stagewestcalgary.com/legends-of-rock-n-roll/

Only a handful of songs from the performance were mentioned here. The full song list is available on Stage West’s website via the playbill for Legends of Rock ‘n’ Roll.