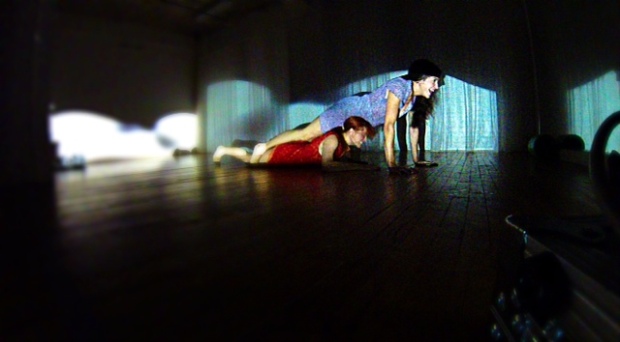 Project 404’s PrimorAgator Diaries is an original contemporary dance work informed by the writings of Jeanette LeBlanc, with the concept, choreography and sound design by Jill Henis. This site-specific piece is staged inside Henis’ downtown studio space, located inside a building where the top two floors accommodate working artists. Performed by Henis and collaborator Barbara England, PrimorAgator Diaries is a deeply intimate look at a life in transition.

Once the audience settles into their seats, Henis, lying nude on the floor, awakens. She is caged by three walls and a curtain of light fabric (that separates her from the audience). England, dressed with black heels, enters the space as Henis retreats away against the back wall, keeping herself hidden behind fabric. Roaring white noise is projected onto the walls (projection & visuals by Greg Debicki). England is ferocious with her movement, stomping loudly with her heels as she moves across the space.

Afterwards, Hennis, now dressed, takes a large roll of aluminum foil and rolls it out like a carpet. Carefully, she tries walking to the other end without wrinkling the foil or creating a disturbance of any kind. Anyone who has used foil before knows how tricky the material can be when handling. Henis’ effort doesn’t fare well.

The imagery created by the large studio mirror stage left is very striking. There’s this great triangular symmetry when Henis walks downstage (diagonal) on the foil. She comes down from the peak to the base, to the audience; she comes out of isolation.

England joins Henis in a ‘four-legged race’ to stage left, to the mirror. The dancers shuffle forward, becoming more and more competitive as the race goes on. So competitive, in fact, that England and Henis are soon grappling each other. What’s really funny are these moments where the two break and smile at the audience, like they were friends and this is only friendly competition, despite their contrary actions. We wonder, though, why these “friends” are tearing each other down rather than helping each other achieve their mutual goal? Is this a race towards self-improvement, where envy rules the roost?

The dancers enter a club where they enjoy loud, pumping music. There’s a big splash of colorful lights that hits the room as England and Henis lose themselves in the music. The scene is so very different than the ones before. Where the others were filled with anxiety and self-consciousness, this club scene is loose and without inhibitions.

Naturally, however, the party ends. (The party always ends). There’s an air of “what now?” between England and Henis.

Ultimately what happens to Henis is that England wraps her, from head to toe, in bubble wrap. A recorded interview with an old man plays, with this line jumping out “Have you thought how you want to spend the rest of your life?” Sure, Henis is safe in her bubble wrap cocoon, but she’s also trapped. She can’t move, her body at the mercy of England who starts to dance with the cocoon.

Eurythmics’ Sweet Dreams (Are Made Of This) begins to play. England drags Henis, still in the cocoon, across the floor as Henis softly repeats the lines of the song.

In these chapters of PrimorAgator Diaries, there’s an underlying fear and vulnerability that rises to the surface. Henis’ choreography observes someone trying to come out of their shell and connect with others while capturing some notion of self. In pursuit of trying to please other people, however, the self becomes lost, perhaps overtaken by this intense desire for belonging. And there seems to be no happy medium, or at least a capacity to reach some sort of in-between. Henis’ character is impeded by self-doubt, whereas England’s whole persona breathes confidence; the road map to this latter destination is non-existent.

Debicki’s projection work in this tight (unventilated) space really throws the audience into the frenetic headspace of the work, not to mention the audience’s close proximity to the dancers. The mirror that reflects the inner duality, conflict of Henis’ choreography is a strong visual element. It opens the space creatively, and Henis’ keen eye conjures great visual dynamics.

Henis and England are a dynamite team. They display great versatility (and some fun character work) in this piece that really feels like flipping through a diary, with all the juicy pieces coming alive. And what commitment in such a hot space, especially Henis whose breathing is restricted within the cocoon. Kudos to them for their visceral energy in this bold piece by Project 404.