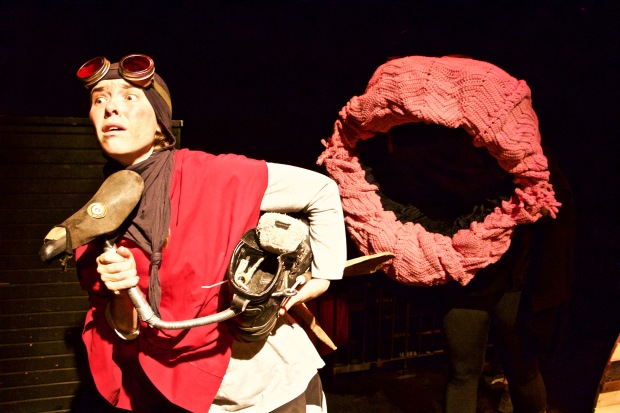 One day, perhaps sooner than later, the taps will shut off. Water will become a scarce commodity, if it isn’t already. In the future, sources of water like the Bow River will be relegated to the realm of myth.

Enjoying its world premiere at the Joyce Dolittle Theatre, River: A Puppet Myth is the latest from Mudfoot Theatre. The play, written by Co-Artistic Directors Ian McFarlane and Geneviève Paré, stages three explorers on a journey to find the Bow River. Stories of the Bow River, passed down through the generations, help guide the explorers on their journey, with an ancient scroll (coloured with pictographs) acting as a map of sorts.

With no signs of the river anywhere, Dha (Ali DeRegt) has doubts that the river still exists. Une (McFarlane) has faith that the river still flows, thinking that maybe the group hasn’t grasped the full meaning of the stories. Meanwhile, Ba (Paré) finds herself communicating with a grizzly bear named Griz (Erinn Watson), who gifts her different objects, at night. Her relationship with Griz is a kind of reconciliation with nature.

What created this post-apocalyptic world was the Hunger, a destructive force that devastated the planet. In one story, the audiences learns that Bison were once plentiful until the Hunger caused them to be overhunted. Man’s relationship with the bison, who he relied on for many things like warmth, was healthy until greed took over. Presumably, the Hunger caused humanity to exhaust the planet’s resources without taking into account long-term consequences, leading to irreversible climate change, hence the search for the Bow River.

Appropriately, given the show’s environmentalist concerns, Mudfoot Theatre has constructed all its puppets from discarded materials. The large bison is made from a burlap sack, and the magpie has a bicycle seat for a head and large boot for a body. Other materials like a tin can (bent to create a ‘head’, dressed with hair and big eyes) are used for simpler puppets.

What’s really funky is this whole communication contraption that has McFarlane cranking a bike pedal by hand for power, Paré spinning a roof turbine adjusted to her helmet to receive incoming messages, and DeRegt tapping a makeshift morse code machine. It’s quite a sight when the group activates this wacky apparatus in the wasteland.

This act of staging ‘junk’ is a potent display of human carelessness and indifference to environmental issues. What a thing to have people confront (again) discarded objects, some of which may survive long after humans are gone. The productive use of discarded materials not only drives home not only how much people waste, but what can be achieved through recycling. One could interpret this act of staging ‘junk’ as a political statement under the guise of quirky, ‘harmless puppetry.

So, it’s too bad that the story fails to deliver the same impact.

Mudfoot Theatre’s ingenuity and effort in finding the local in a global issue are worthy of much praise, but the script is often incoherent. Somewhere here, there’s a message that our current habits are endangering the Earth, otherwise there wouldn’t be so many ‘junk’ on stage. The argument is that humanity needs to re-discover and re-establish its relationship with nature, or else face disaster. Unfortunately, the verbose, metaphor-laden language does little to support this argument as it produces more head scratching than nodding heads. Likewise, the in-world references are never fully explained, so the audience is alienated from knowledge useful to access this imagined future. Thankfully, the script doesn’t bang us on the head like other environmentalist fiction (see: Jetsons: The Movie), but some direction would be helpful to grasp its full intentions.

Ba cryptically processing memories from people and animals of the past who enjoyed (and experienced the destruction) of the Bow River would be interesting to see explored further. There is something both unsettling and intriguing about a future where the pain of the past still has roots in the ground.

Director Lindsey Zess-Funk really knows how to create some astounding visual moments. Something so simple as Griz walking through the explorers’ camp (set design by Lane Shordee) is given emotional weight through good pacing and movement with purpose. Zess-Funk displays a good understanding that these puppets are not just puppets, but creatures connected to a larger story and who play an important part in that bigger picture. The same can be said for these puppeteers, including Emily Schoen who maneuvers Bertha’s large eye in the mountainside. There is a physical language flowing in this show that captures the play’s essence.

Although highly creative and unique, Mudfoot Theatre’s River: A Puppet Myth is a lengthy, jumbled exploration of what lies on the horizon.

For information about the show, including how to purchase tickets, visit: http://www.mudfoottheatre.com/projects.html