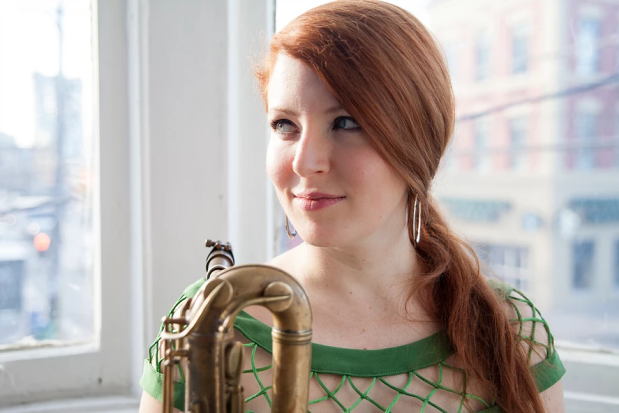 Alison Young’s So Here We Are is up for Jazz Album of the Year: Solo at the 2019 JUNO Awards. Photo Credit: Lisa MacIntosh Photography.

In January, saxophonist Alison Young earned a JUNO nomination for her debut album So Here We Are. The album is up for Jazz Album of the Year: Solo at the 2019 JUNO Awards. The Toronto-based jazz artist remembers feeling shocked when the news broke.

“Initially I thought, that’s got to be a mistake,” Young said. “It’s my first album, and that it got nominated is a big deal for me. The recognition is so meaningful to me. It feels really important to be acknowledged like that.”

“You never know if you are going in the right direction or if people like what you are doing. You feel heard.”

The Ottawa native has been active in Toronto’s jazz scene since the early 2000s. She studied music at the University of Toronto, and since then has toured across North America, Europe, and South America.

Young describes So Here We Are as a “musical hello” and an amalgamation of all the music she likes to play.

“I’ve been wanting to put out an album for years,” Young said. “I’ve been trying to talk myself into it for five or six years. It’s easy to get distracted from my own projects.”

“The way it happened was Jeremy Darby gives away a day of free recording time to people he thinks deserves it, “ Young said. “It was a real push, him awarding that to me. That really forced me to get the band together and actually lay it down.”

“I felt like I wasn’t ready. I felt stressed out. It was hard to make decisions about how the songs should be presented,” Young said about recording the album. “By the time we did the second session, it was a lot more fun and cool and not as stressful.”

Young recorded the album with her band the Alison Young Quintet. The band has played together since 2012. “We are all friends and have played together in various bands and also as a band. It’s a good hang. It’s good musical chemistry there.”

Young has learned many things over the years as a jazz artist, but perhaps the most important lesson she has learned is to let go of perfection.

“I actually quit playing after going to university, because I over thought everything so much. I thought I needed to make music more complicated than it needed to be.”

“You just have to start. You’re always going to learn as you go. Let go of the idea of ever attaining any kind of perfection,” Young said. “The more you know, the more you don’t know. Be okay with it always having to be a learning process. That’s the thing about music, it’s really beautiful and daunting, but you never get there.”

What’s next for Young after the JUNO Awards? In June, Young is going on the road with Corey Hart, the latest inductee into the Canadian Music Hall of Fame. After the tour, Young says she hopes to play music festivals with her band.

The 2019 JUNO Awards will be live from Budweiser Gardens in London, ON on Sunday, March 17 at 8 PM ET and broadcast live on CBC, CBC Radio One, CBC Music, the free CBC Gem streaming service, and globally at cbcmusic.ca/junos.