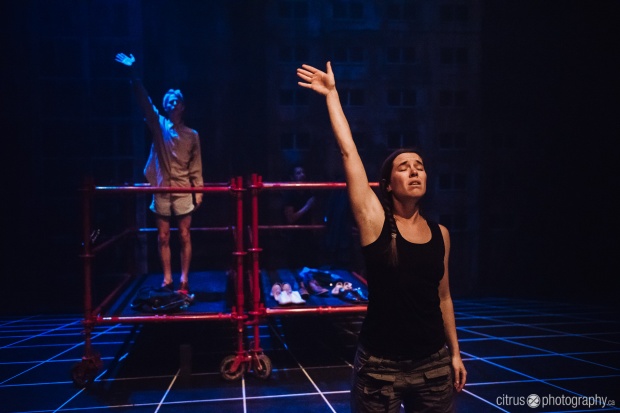 A city is threatened by fire and wild coyotes in Jill Connell’s play The Tall Building. For three strangers living high above in an apartment building, however, it’s not the fire or coyotes that concerns them – it’s each other.

Presented by Handsome Alice Theatre, Connell’s The Tall Building is a strange, yet intriguing play about modern life. Boy (Geoffrey Simon Brown) seems more interested in his neighbor Sulla (Geneviève Paré), who lives across the hall, than the fire growing uncontrollably outside. Unfortunately for him, Sulla has no interest in speaking with him or anyone else. The young boy is determined, however, to interview Sulla for his citizen newspaper. Watching them from afar is a boastful Assassin (Telly James) who eventually introduces himself to Sulla and Boy, perhaps only so he has an audience.

Two unnamed radio personalities periodically broadcast lives updates on the developing crisis, until one of them goes off-the-air without warning.

The Tall Building brings to mind Eugene Ionesco’s play Rhinoceros as the number of coyotes running wild in the streets seems to increase as time goes on. Where Ionesco was concerned about conformity, Connell’s concern is the isolation and indifference created by urban development – of cities growing taller than communities growing wider. Questions of identity emerge as the situation worsens for the last remaining humans of what seems like the new status quo. Hints of this new status quo can be seen in the way Boy praises the 7-Eleven for how well it provides him with everything he needs, much like a parent. He seems more connected with a corporate franchise than other people; the worst nightmare for anyone who likes independent bookstores and coffee shops.

The play benefits from Denise Clarke’s vibrant direction as sometimes it gets too caught up and tangled in its own concerns, sprawling outwards like a city overwhelmed by development. Clarke takes advantage of the space available to her inside the Big Secret Theatre by using movement to express the stress of urban life, loneliness, and melancholy. The use of movement strengthens the play’s introspective nature by providing deeper insight into the psyche of these off-beat characters.

Although much older than the character he plays, Brown takes on the qualities of an inquisitive young boy/citizen journalist very well. It’s fun to watch the energetic Brown play a character who is the complete opposite of Sulla, a young woman hardened by abandonment (although we later learn the two characters have more in common than they think). Sulla’s character arc is well-articulated by Pare who plays her with an aloofness that gradually melts away. James is charismatic as the assassin who everyone knows is an assassin. The actor’s snake-like slithering makes us unsure of what his character will do next. The cast draw us into Connell’s surreal world by embracing their characters’ idiosyncrasies.

Although sometimes it loses its way, Connell’s The Tall Building is an insightful play about city life in these modern times. Handsome Alice Theatre’s production of The Tall Building shines thanks to strong direction and design.

For information about the show, including how to purchase tickets, visit: http://www.handsomealice.com/