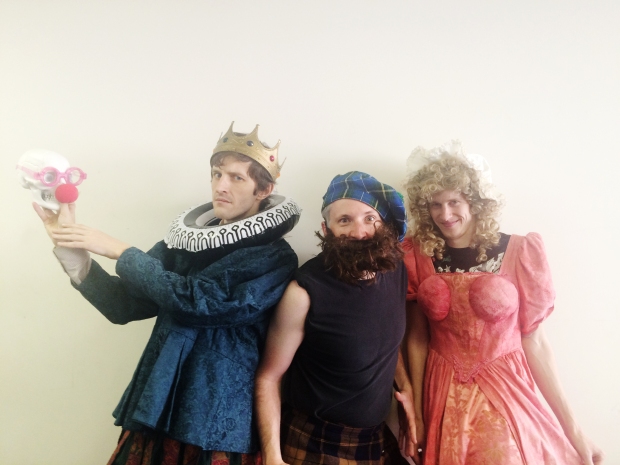 A co-production by Lunchbox Theatre and The Shakespeare Company, The Complete Works of William Shakespeare (Abridged) blasts through the Bard’s 37 plays in one single evening with hilarious results.

Written by Adam Long, Daniel Singer and Jess Winfield, The Complete Works of William Shakespeare (Abridged) is a parody of all things Shakespeare performed by three actors. Braden Griffiths, Geoffrey Simon Brown, and Aaron Cotes perform the play as themselves, well really exaggerated versions of themselves. Preeminent Shakespearean scholar Coates carries all 37 plays in an enormous book, acting as director to the actors who sometimes get away from the original source material. Through slapstick and improv, the actors set out to accomplish the amazing feat of capturing all of Shakespeare’s works in one single theatrical experience.

Everything about the performance is deliciously over-the-top and absurd. Shakespeare’s tragedy Titus Andronicus is parodied as a very bloody cooking show. Then, the three white actors agree that neither one of them can play the character of Othello without being racially insensitive, so they decide to rap Othello from beginning to end. The histories are performed as a football game, with the actors tossing the crown from one king to another on the gridiron with sports commentary.

And Brown’s female characters are keen to vomit on the audience.

Director Kevin McKendrick’s firm hand makes for a well-tuned production. There is method in the madness, although sometimes there are moments or gags that fail to hit the mark. Even still, the sheer hilarity of three actors trying to perform 37 plays in under 90 minutes is enough to forgive minor missteps.

Griffiths, Brown and Coates would fit right in with the acting troupe from A Midsummer Night’s Dream. The energetic trio are a lot of fun to watch as they rip through Shakespeare’s plays, smashing the fourth wall along the way.

The Complete Works of William Shakespeare (Abridged) runs at Lunchbox Theatre until the 24th. As part of Lunchbox Theatre To Go, the play will be presented The Beddington Community Arts Centre (Storybook Theatre) starting April 27th.

Get thee to The Complete Works of William Shakespeare (Abridged), the silliest Shakespeare show around.

For more information about the show, including how to purchase tickets, visit: http://www.lunchboxtheatre.com/complete-works