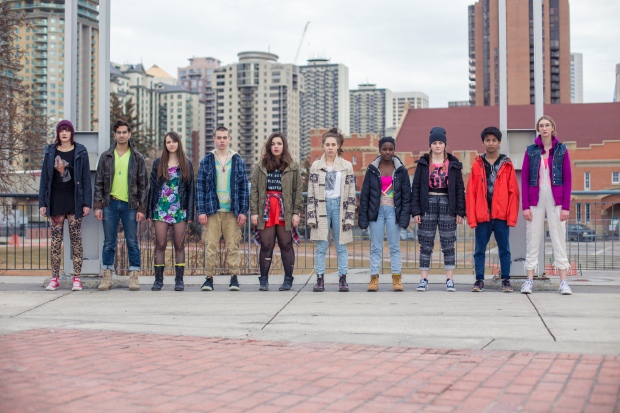 Everyone’s asking, what are the kids saying these days? It’s not a new question, no. Teenagers have always puzzled parents, teachers – and themselves. Canadian playwright Jordan Tannahill is not only interested in what youth are saying, but what they’re doing when adults are totally absent.

Where do your children go at night?

Presented by Theatre Junction, Tannahill’s Concord Floral stages the complex lives of Calgary youth trying to outrun a plague. The supernatural terror starts when Nearly Wild (Michaela Friedland) and Rosa Mondy (Breanna Kennedy) discover classmate Bobbie James’ body (Kloee Huberdeau) at Concord Floral, an abandoned greenhouse where all the kids go to party and, in this case, smoke weed. Frightened, Rosa drops her iPhone into the body by accident, leaving it there along with the corpse. The two girls try to forget all about the body, but one night the lost phone makes a call from beyond the grave.

Tannahill’s play is not just about the ghost itself, but the haunting. What is it that haunts us today, asks Tannahill? What haunts us are tragic cases of bullying, the loss of innocent youth like Rehtaeh Parsons and Amanda Todd.  The plague may be metaphorical, but it’s still very real. None of the youth can sleep or function properly with the guilt of inaction and apathy weighing heavy on their conscious. Bystanders are not powerless nor are they removed from any responsibility, Tannahill argues.

Across the play’s ten chapters, there are vignettes that stage stories from the various neighborhood youth. One of the stories sees a young girl named Forever Irene (Lauren Marshall) using a showerhead for sexual pleasure, running out into her yard after her mom and brother barge in on her. She lies in the grass while her father mows the lawn, waiting to see if he will notice her or not. Another story sees Just Joey (Omar Rufti) searching for a quick hookup online, eventually meeting a classmate’s father at Concord Floral late at night. In these stories, Tannahill reflects on the need for contact and affirmation of self, noting how difficult it is for adolescents to belong when they don’t exactly know who they are. And so, exploration is necessary for confused youth to find some comfort of self, which can lead to good or bad outcomes.

In the show’s program, director Raphaele Thiriet draws attention to a frustrating paradox concerning young people. Teenagers are seldom heard despite prevalent cultural images of silenced youth. The acknowledgement of marginalization is not enough, it seems. For this production of Concord Floral, Theatre Junction has cast the members of its 2015-16 Mentorship Program to play the youth in social turmoil. The actors range between 16-21 years old, giving youth an actual presence on stage. In theatre, there are many acceptable substitutes, as the stage is a limited medium, but sometimes a subject group’s real presence is absolutely crucial as it is here with this emotional story about young people.

Speaking of authenticity, the 27-year-old playwright captures the youth voice masterfully. Tannahill’s young people are at times outspoken and brave, and other times shy and unsure of themselves. Sometimes, they don’t know what to say at all. But whatever the scenario, everything is treated as the most important thing in the world. Tannahill’s brilliantly rhythmic writing is elegant, but firm in its intentions.

Also, Tannahill has a playful sense of humour, humanizing inanimate subjects like the Greenhouse (Alyssa Latimer) or the Couch (Bandile Phiri) everyone drinks on. The effect draws us further into this world damaged from its roots, positioning the audience to see themselves as something larger than themselves. (And it’s also just really funny, too).

Under Thiriet’s sharp direction, the cast of young actors deliver earnest, understated performances. The actors are steady in their delivery and in tune with their stage partners, producing strong ensemble work. The production is rough in some areas with regards to timing and precision, likely due to the inexperience of its young actors, but the talent that shines from start to finish in this deceptively simple show make minor issues easily forgotten.

Ultimately, Tannahill’s Concord Floral is a fascinating piece of work that grants teens a platform to be heard. The presence of real youth elevates the play to a substantially emotional experience where its subject group are treated with respect and intelligence. Theatre Junction’s production of Concord Floral is one not to miss.

For more information about the show, including how to purchase tickets, visit: http://www.theatrejunction.com/portfolio/concord-floral/