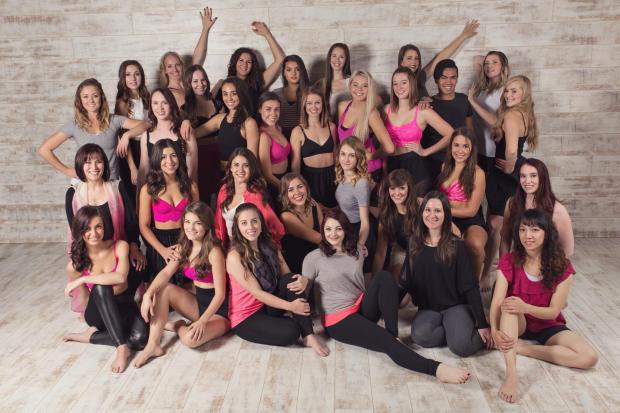 Trying to explain social media is difficult. No really knows why they need minute-by-minute updates from just about everyone and anyone. Why anything goes viral is a mystery, even for so-called social media ‘gurus’. And who knows why people obsess over how many virtual affirmations i.e. Likes and Hearts they receive online. If there’s at least one thing everyone can agree on, it’s that social media, for better or for worse, is simply fascinating.

Presented at Mount Royal University’s Wright Theatre, En Corps Dance Collective’s #ThisIsLife journeys through the world of social media, exploring its ups and downs along the way. The multi-media production incorporates the use of video screens to help seek out and examine the various impacts of social media on daily life.

After the show’s big opening number “Dress Rehearsal”, choreographed by Kelsea Fitzpatrick, Lauren Miholic’s “Bros” takes the stage. There’s no doubt that social media has dramatically changed the way friends and family communicate. Miholic’s brisk, light-hearted piece focuses on social media as a tool to collect and store memories, staging four friends who connect online as well as offline. The piece ends on a happy note as the friends are able to take that connection from the online to the offline.

Next, Shondra Cromwell-Krywulak’s “Troll” stages an urgent message about cyber bullying. In this piece, one group of dancers are dressed in red – Hate – with the other group dressed in white – victims. The piece is set to Shayne Koyczan’s “Troll.” There’s this strange idea that the online and the offline are two separate worlds, that whatever is posted online has no real world consequences. Cromwell-Krywulak’s piece argues against the idea. Her dancers in red physically dominate the others, pushing them around until one dancer in white is pushed too far, taking her life as a result. The choreography is powerful in its ability to clearly communicate its narrative, while stirring reflection on tragic cases of cyber bullying e.g. Amanda Todd.

Christen Terakita’s “Parallel Play” explores another recent phenomenon, our careless disconnect with the physical world. The dancers walk onstage, distracted by their smartphones – their hands are cleverly illuminated by handlights. The choreography sees some dancers performing distracted, while others are more focused on the task at hand, switching periodically. Terakita’s choreography works marvelously in making its point about just how glued people are to their screens, even during moments where their attention is needed most. Although the dancers eventually realize they ought to pay more attention at the end, they soon go back to their old habits, or the new normal.

Katherine Mandolidis’ “Chatter” stages two friends trapped in a miscommunication caused by posts made to Facebook. Dancers fill in the space between the friends, who are standing far apart from each other on stage. The choreography is something like a modern game of telephone, where neither end is receiving the same message. Mandolidis’ piece ends as these type of disputes should: the two friends meet face-to-face and clear their miscommunication, laughing it off as the lights go down.

The first act ends with a steamy cabaret number based around popular dating sites and apps like Tinder – the “hook up” app. Susan Rowland’s “Crazy For You” stages a playful dance of seduction that proves no matter the method, the rules of the game never change.

Janelle Rae Ferrara’s “#filterthis” is all about the major impact of photo manipulation, popular on platforms like Instagram, on women and their self-confidence. Rather than search for imperfections, Ferrara argues women ought to celebrate their bodies, for they are beautiful just the way are. Ferrara’s piece is strongly reminiscent of a Beyoncé music video. The five dancers certainly channel their inner Queen B with their stunning performance that has the audience whooping and hollering by the end of it.

Misha Behnia brings the terror of cyberstalking to the stage with “Find You.” Someone has been obsessing over a young woman’s online activity recently, leaving comments that disturb her. While her stalker is anonymous, she suspects it’s someone close to her. Behnia has chosen slow renditions of You’re The One That I Want and One Way or Another to create a frightening atmosphere onstage. The lyrics to One Way or Another (“I’m gonna get ya”) take on a whole new dark meaning in this piece as a terrified dancer runs for safety amidst a sea of people, any of which could be her stalker. Behnia’s slow build in tension is genuinely unsettling.

A much lighter piece, Katherine Wilson’s “Just 5 More Minutes…” looks at the struggle of falling asleep at night now that the internet is just at our fingertips. Wilson’s piece starts with a young woman who decides to watch cat videos before going to bed. A rabbit hole, if ever there was any. The young woman soon finds herself surrounded by dancers dressed as cats, ears and all. The piece is absolutely hilarious as it goes from zero to sixty in the blink of an eye. The young woman finds herself searching for more videos to watch, landing on Janet Jackson’s “Rhythm Nation.” Dancers come out to recreate Jackson’s popular dance moves. The piece ends with our tired friend getting barely a second of sleep before her alarm goes off. (The struggle is real).

Mandolidis’ “Distraction” focuses on the deadly phenomenon of distracted driving and its aftermath. “Distraction” is an emotional piece, evoking a strong sense of grief and hurt as one dancer watches her friends lose their lives to an urge to always be connected, no matter the situation.

The night’s last number is “Count on Me,” choreographed by Emily Neuheimer and Susan Rowland. The final word about social media is that social media is not some strange, otherworldly entity, but something created by people, for people. When used responsibly, social media can benefit people in a lot of different ways.

While not clearly linked by an overarching narrative, the show’s dynamic multi-perspective look at social media is compelling nonetheless. The format makes sense considering social media is so versatile and elusive in its identity. Trying to cover the various dimensions of social media through some patchwork story would likely be disastrous. Here, each dimension is allowed to breathe and take on its own character to full effect, like Behnia’s “Find You.”

For more about the information, including how to purchase tickets, visit: http://www.encorpsdance.ca/#!-thisislife/c72f

Choreography: All Choreographers
Director/Concept: Susan Rowland
Film Editing: Valerie Stretch
Performed by: The Choreographers of #ThisIsLife and the En Corps Board of Directors
Music: Justin Bieber – Mark My Words

Something in The Water

Choreography: Emily Neuheimer and Susan Rowland
Music: Bruno Mars – Count On Me
Performed by: All Cast