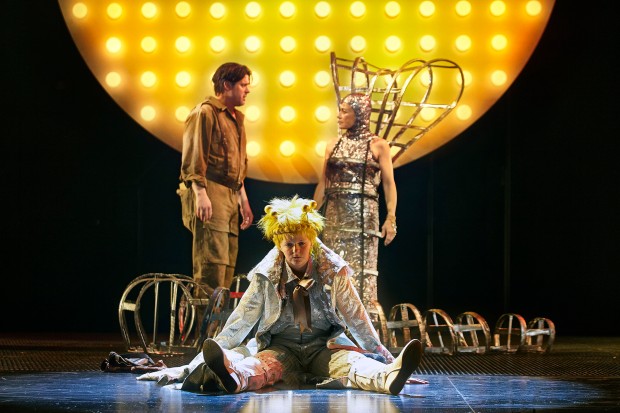 If any book should not be judged by its cover, it’s The Little Prince by Antoine de Saint-Exupéry. At first glance, the novella appears to be a children’s story, an imaginative tale about a young boy who travels the stars. Then, the reader is hit with deep, solemn meditations on love, friendship and growing up. Many have fallen in love with the story’s poetic elegance and universal themes, so much so that Saint-Exupéry’s novella is the fourth most-translated book in the world.

Imagine then, the excitement surrounding the world premiere of The Little Prince – The Musical at Theatre Calgary, in association with Lamplighter Drama.

Adapted by Nicholas Lloyd Webber and James D. Reid, The Little Prince tells the story of a Pilot (Adam Brazier) who crashes his plane in the Sahara Desert. Here, in the sweltering heat, he meets The Little Prince (Sarah Caraher), a boy who has left behind his asteroid and beloved Rose (Elicia MacKenzie) to travel the universe, eventually landing on Earth. The Pilot befriends The Prince after meeting a Snake (Louise Pitre) who tells him he can help fix his plane. Unbeknownst to The Pilot, The Snake has other, more sinister, plans for The Prince.

The first act is magnificent with its stunning visuals and catchy musical numbers – book, lyrics and original compositions by Webber and Reid. Director Dennis Garnhum stages what looks and feels like a storybook. The big production number ‘Welcome to My World’ is marvelous, a real crowd-pleaser. Bretta Gerecke’s costume designs for the six Men of The Planets are deliciously elaborate and colorful, as are most her creations for the show, ideal for the musical number’s circus-feel.

Of course, the show’s lightheartedness is underscored by musings on the human spirit. These musings eventually make their way to the forefront, and this is where the production stalls and flounders.

The trouble with this stage adaptation is, the novella can be a deeply personal experience. Saint-Exupéry’s story is enigmatic, something like a Gordian Knot that the reader has to decipher. The production mimics that quality, as demonstrated by The Pilot’s constant confusion, but then chooses to tediously unpackage and spell out the story’s various allegories through song. (If you didn’t get it the first time, you’ll likely get it the second time, or third time…)

Garnhum claims that the production is perfect for both adults and children alike, but some audience reactions say otherwise. There are children restless in their seats, while a few adults seem to simply lose interest once the glitz passes. The second act’s dull pace is a major factor, as it hangs its hat at the end and calls it a night. The finale sums up the show’s ultimate message, then quietly slips into the background. An underwhelming finale, to say the least.

From start to finish, the music is absolutely delightful. The soundtrack is an eclectic mix of styles, going from quirky, funky fun to emotionally riveting ballads. Brazier’s vocals are on point, although not showcased enough. Caraher struggles with the high range that rests just a touch outside her abilities. In a more comfortable range, Caraher’s clear, emotive voice knocks it out of the park. Speaking of emotive, Pitre is simply wonderful as The Snake with her sultry, sinister voice that could entangle any prey, our ears in this case. Jennie Neumann is bright and peppy as The Fox, and MacKenzie is a real treat as the Rose.

With that being said, there’s a strong sense that this show would work better as a concept album, than a big-budget musical production.

Hardcore fans of The Little Prince will want to fly in and check out the latest musical from Theatre Calgary. Those curious about the show, perhaps taken by dazzling production stills, should check it out, but hold their expectations steady. Others, well it’s a difficult sell. Audiences will certainly feel good watching The Little Prince, but how long that effect will last is questionable.

For more information about the show, including how to purchase tickets, visit: https://www.theatrecalgary.com/2015-16/the-little-prince-the-musical