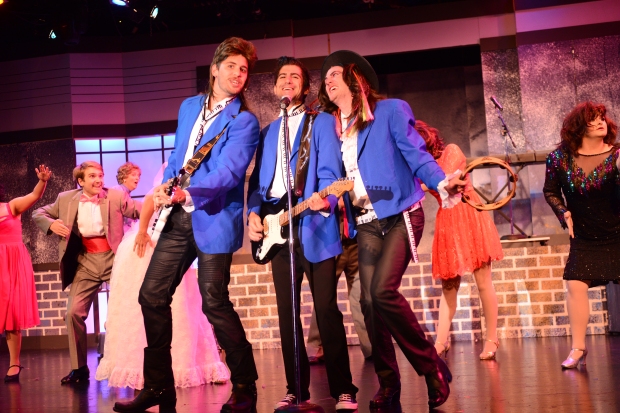 Sammy (Ian Ronnigen), Robbie (Aidan Desalaiz), and George (Andrew McGillivray) are a hit at all the weddings in New Jersey. Image provided by Stage West.

From the loud colours to the big hair and questionable fashion, there is no doubt that the 1980s were truly outrageous. The 80s were also a lot of fun thanks to pop culture icons like Eddie Murphy, Madonna, Pac-Man, and the ever puzzling Rubik’s Cube. And now, Stage West Theatre Restaurant brings back, in full force, these memories of the 80s with The Wedding Singer, a totally rad musical comedy.

First produced on Broadway in 2006, The Wedding Singer is a musical based on the hit 1998 film of the same name, which starred Adam Sandler in the titular role. This quirky comedy tells the story of Robbie Hart (Aidan Desalaiz), a popular wedding singer from New Jersey. When his fianceé Linda (Sarah Horsman) dumps him at the altar, Robbie becomes disillusioned with love. All that changes, however, when Robbie falls for Julia Sullivan (Elicia MacKenzie), a waitress at the reception hall where he and his bandmates Sammy (Ian Ronnigen) and George (Andrew McGillivray) perform. Unfortunately, Julia is engaged to Glen Guglia (Kellan Ziffle), an obnoxious Wall Street banker.

For sure, The Wedding Singer (book by Chad Beguelin & Tim Herlihy) is light on character development and heavy on cliché, but is it ever a good time regardless. And a lot of that is thanks to director/choreographer Tim French and the talented cast of actors at his disposal.

Right away, French’s vibrant choreography for the musical’s opening number (“It’s Your Wedding Day”) captures the audience’s attention. Leslie Robinson-Greene’s bright, eye popping costume design is an attention grabber, too. And musical director Konrad Pluta and his band deliver a great sound for the production’s catchy musical numbers (music by Matthew Sklar and lyrics by Beguelin).

Desalaiz’s Robbie, a romantic sap to begin with, is played much like a lost puppy, although this puppy has serious (and hilarious) bite as heartbreak shows. Playing opposite Desalaiz is MacKenzie who brings a charming dorkiness to her role. And both actors really dig into the fact that their characters are in love with love, giving us an innocent clumsiness between the two as they come to slowly realize their feelings for one another.

And surrounding Desalaiz and MacKenzie are a group of oddball characters. Marcia Tratt delights as Rosie, Robbie’s rapping/breakdancing grandmother. (Yes, really). Dana Jean Phoenix plays Julia’s friend Holly, a spunky Madonna-esque character who dances like a maniac. (The bucket of water from Flashdance makes a cameo). And McGillivray who wins the audience over as a very flamboyant Boy George.

But what’s a shame about the great character work, by the ensemble too, is that pieces of dialogue are hard to hear, if not totally lost, over the sound system. The issue may be with the wireless microphones, but certainly the troubled dialogue does take the audience out of the action a bit.

Nonetheless, French knows how to stage a spectacle, to fill the stage with big, exciting movement. The actors make the most of otherwise flat characters by pouring their hearts into their performances. And really, issues aside, it’s hard not to feel a smile grow on your face in this lighthearted, outrageous throwback to the 80s.

For more information about the show and how to purchase tickets, visit: http://stagewestcalgary.com/the-wedding-singer/