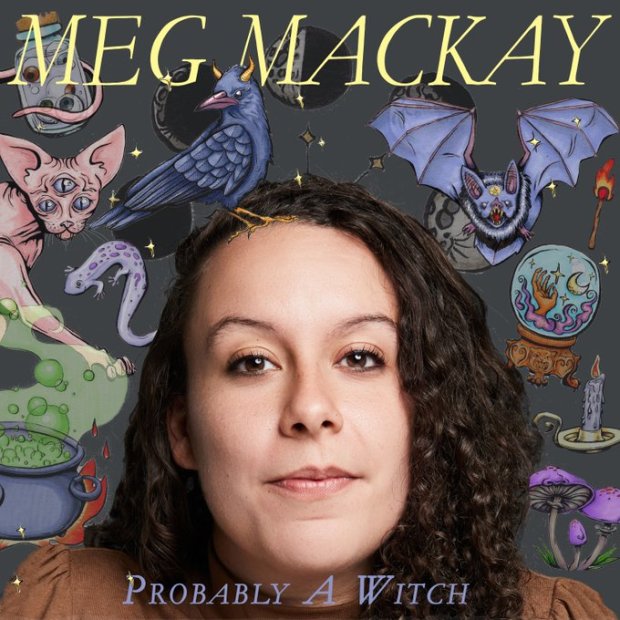 Meg MacKay’s Probably a Witch is a new release from Howl & Roar Records.

Listening to Probably a Witch brings me back to the days of watching Comedy Now! late at night on CTV. I had a 27” CRT TV in my room that I had placed on top of a homemade bookshelf. The bookshelf buckled under the weight of that TV. I don’t know how it never collapsed. Anyway, I would stay up way past my bedtime to watch Comedy Now! As someone not from a major city and who had never gone to a comedy show, watching this program kinda whisked me away to another reality. I was also a teenager, so there was that element of participating in something cool and mature.

Why I bring up Comedy Now! is because the stand-up acts were often so funny and weird. Emphasis on weird. You felt drawn into a rabbit hole, especially watching it late at night. That’s how I feel about MacKay’s Probably a Witch. MacKay’s delivery is very Maritime-y. It’s a bit calm and measured with moments that swing up, and she’s putting on all sorts of wacky voices. It’s like we’re having a barbecue, playing washer toss, and then MacKay comes to the party with the laughs. We all forget about the burgers on the grill because everyone’s too busy listening to MacKay talk about spoons class and Britney Spears’ three career phases.

Look, I’ve listened to this album three or five times already, and I’ll probably listen to it a couple more times. It’s friggin’ hilarious, man. MacKay talking about her super tough mom (“I didn’t raise a wuss!”) at a pride parade is a roar. Give the album a listen.